Notes from the Ground 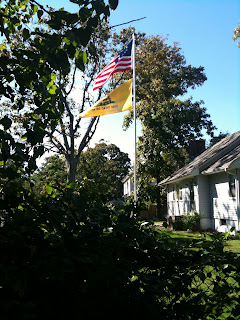 As promised, notes from a trip out to Patchogue on Saturday, organized by our local "chapter" of OFA, Organizing For America. If that sounds so unexciting, so "establishment" so - - and you're saying instead, what's next - - now that Obama's in, and by the way, not all that great. If you're thinking that, really, get over it. OFA, Obama's people, are doing god's work. If you were to ask me, what's the most important thing a citizen of the USA could be doing right now, at this very minute, I'd say ' canvassing for the progressive candidate in your vicinity.' I say this knowing full well what a pain it is doing this -- walking up to doors of strangers, wondering whether there'll be an old man in an undershirt, or a woman screaming, attempting to get a restraining order on her "old man," a police car idling at the curb. Or a German woman whose husband was a veteran.... (We came across all three) It's a little nerve wracking, I"ll be the first to admit it. I can't go up to someone I don't know at a party of a friend, so wandering around a neighborhood I've never been to, 50 miles from home, that predictably votes Republican, makes you swallow hard.
But it is what's necessary. Really really necessary if you want to keep the House and Senate in at least moderate hands. If you want to keep the incumbants in and give right wing opponents a real run for their money, so that they know who their constituents REALLY are.
So we disembarked at Patchogue, and were given our candidate's buttons and (literally) our marching orders. We split up, each small group of two or three to a volunteer local driver. Our driver had a talking GPS so we didn't get too lost, as we tooled through the suburban streets out to Mastic Beach, a neighborhood of mostly converted beach houses (we were a spit away from the ocean, but no, we couldn't go canvass there. Those homes were mostly second homes.)
So we were making our way confidently, more or less. Until we were let off, when I felt very "lost," looking up at the flag of the tea-party -- a large yellow banner with a 'Don't Tread on Me' inscription -- flying on a high pole below the colonial flag, i.e. thirteen stars in a circle. Oh boy. Where am I? The GPS lady didn't warn me about this. Our list skipped over this house, stopping at about every fifth house on Alder, and leading us, in a kind of scavenger hunt, to a series of small, and middle-sized homes -- some terribly derelict, overgrown yards and some clipped painted and polished. I wished that dogs could vote, because most of the time they were the only ones home. 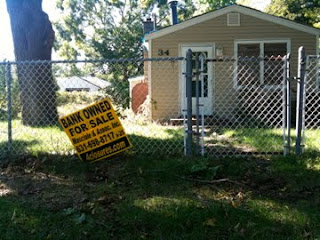 Al is the shmoozer. We'd been told on our last canvassing trip -- which was for Obama in '08, down to Wilkes-Barre, Pa. -- that all those graphs and charts, statistics and prognoses you'd been dutifully studying? Throw them out. People vote on character, not programs. My guess is that if I looked inward, I'd find out that it was true of me too. I swooned for Obama after reading Dreams for My Father. If you remember, there was not a single word in there about his plans to give every American health care. But I tended to forget that fact and maybe out of nervousness would launch into a little spiel about the fact that Tim Bishop had voted for the Stimulus Bill (millions of jobs, well a couple hundred thousand? But whose fault was that?! Had Obama been given the money he actually wanted... At least I didn't say a word about any of this. Many people seemed to be completely befuddled. In this case it wasn't the economy stupid) I'd add brightly 'and Bishop voted for the Health Care Bill!' which most likely was shooting my candidate in the foot. Al knew not to go there. Forget about the Health Care Bill. When the elderly unshaved man in the undershirt opened the door to say he was watching The Public Enemy an old James Cagney movie, Al was in his element. Ten minutes later, the two of them were still talking like old geezers, now at a little table on the porch, while Mr. Undershirt was filling out his voter registration form. By the time he was done, he looked up and said, the health care thing. I don't understand why people are against it. (whew)
Al went beyond dedicated. While a woman in all stages of dishevelment was ranting to a police officer, she took a breath to inform us that she couldn't talk, she was trying to deal with a problem with her "old man." Can I leave some literature for you, Al said hopefully. She shot him a please-don't-hang-around-here-a-second-longer look. Al carefully folded the pages of the literature so they'd fit behind her screen door.
A young African American woman, trying desparately to keep her toddler from galloping down the middle of the street brightened visibly when we told her that Bishop voted for all of Obama's programs. Inbetween racing after Junior and admonishing her older child, who wasn't holding onto his young brother very tightly, she flashed a smile when she heard the date of the election. November 2nd? That's the day after my birthday!
Below you'll read the message that was in my 'mailbox' this morning, from Jeanne, our 'Organizing for America' organizer. We're going to take her up on her request for at least one more day of canvassing. We want to give our new ally a nice birthday present.
Dear Friends,
Thank you again for coming out on to canvass on Saturday. Together with our Long Island colleagues, we knocked on a total of 748 doors, talked to 208 voters, and found 110 who were positive about voting for Bishop. As we discussed on the train, the real issue in this race is going to be turnout. Bishop is looking good among registered voters, but his numbers are precarious when you look only at likely voters. The advantage of getting canvassers out every weekend is that we get people to feel personally engaged (and obligated -- statistically, people are more likely to turn out to vote if they've told another person they would).

So with that in mind, I hope you'll be able to come out again on one of the upcoming canvassing trips. We're trying to get as many people as possible canvassing this coming weekend, the 16th and 17th, because the LIRR is undergoing major construction on the weekend of the 23rd/24th, so we may not be able to get many people out that weekend. And of course, we'll be making a big push on the final four days, Oct. 30-Nov. 2.

Hope to see you again soon!
Posted by sooznham at 8:17 PM