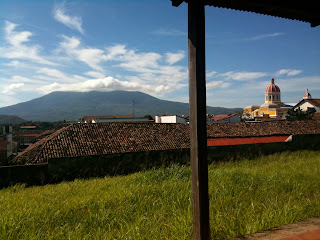 It's been way too long, I know, between posts. Since the last post, Al and I travelled down to Nicaragua. A working vacation, we stayed in a small language school/inn and studied Spanish and toured the countryside with our wonderful hosts. A plug. I must. Escuela de Espanole de Mariposa. (oh dear. I'm sure I've done the grammar wrong on this. My Spanish is still, I'm afriad, very shaky) Paulette Goudge runs the school, and is one of those unusual people who does good things for her community, while seemingly having a wonderful time. She's got an understated British sense of humor, that made me not mind getting up at 7 a.m. for class, knowing she'd be at the breakfast table, chugging her coffee, cigarette in hand, with a sardonic twinkle in her eye. She pays her staff well -- and they taught us well! -- rescues horses, dogs, whatever and they loll about everywhere in her lushly planted mini jungle. (Not the horses. The dogs and cats loll.) And plows whatever profit she earns into the very poor lives of her surrounding neighbors, meanwhile demonstrating to them the benefits of solar energy and chemical toilets. In other words, Paulette really really rocks. 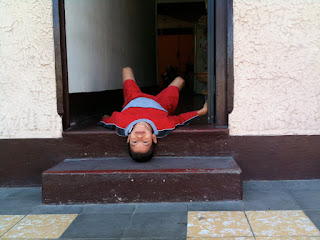 After a week at La Mariposa, we headed down to Granada and then to the Pacific coast.
Our first night in Granada, in the central square, we stopped to listen to a small band of troubadors serenading a little girl on her birthday. Just a little family gathering, and three or four musicians. Her father (I'm assuming) noticed us, and of course noted we were gringos. Was it because of that that he, smiling from ear to ear, sent us via one of his nieces, or whomever, a huge piece of birthday cake each and a cup of soda? This was lucky because that night, as on at least one other, a blackout plunged the city in darkness for about two hours, Without the cake, we would have had no dinner at all. Lack of electricity (and water) throughout the country are doggedly intractable problems.
Despite people all over Nica. adopting American dress and names (One of my teachers was named Jimmy, whose son was Steve, e.g.) it's got roots back in Europe, from a long ago century. Kind of like New Orleans. In fact, I remember telling Al -- Granada has something of the feel of New Orleans. The width of the streets, height of curbs, central square all brought me back to my adopted city. And when a group of churchmen, headed down the street with a statue of Jesus, playing a cacaphonous, dark, dirge-like brass number , reminiscent of a Second Line (but without any of New Orleanian irreverence and hi jinx) the link had been secured.
Next post: We got the land! We got the land! the Garden of H.O.P.E. signed the contract!
more to follow.....
Posted by sooznham at 8:46 AM No comments: Links to this post