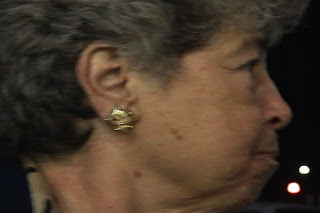 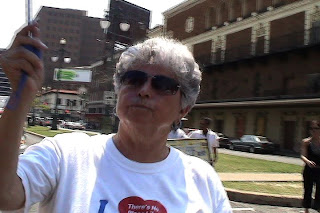 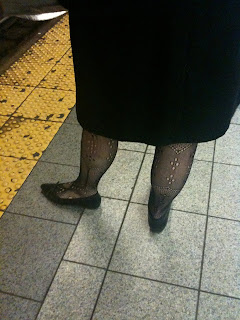 These amazing stockings were spotted at the Broadway-Lafayette station, waiting for the F train.
And this photos has nothing to do with the continuing saga of the Garden of H.O.P.E. (Helping People With Everything) and the work to finish Mama Sue's Garden, my film about three people recovering each in his or her own way from Hurricane Katrina. And St. Bernard Parish.
I just loved this beautiful pose against the grit of the subway. This is where I live, but I'm spending a lot of time looking at the people of my film, subjects, we filmmakers call them, as they were three years ago. Strange, to be living in the recent past like this. They're moving forward, and I'm kind of stuck.
Today I logged a tape of Mama Sue sitting on her front porch -- of a very unfinished house -- dragging away on her cigarette as she explains how different she is from her husband Lou. In two weeks I hope to go into the editing room.
But we're all together in the present, fantacizing about our garden, drafting proposals (one is going off to Post Cereal and I hope you vote for it. It's one of those) and until just two weeks ago, that felt great. Then...I get a call from August, who is called in the proposal .. master gardener. He's some gardener. He really is.
August's voice -- far away, there's a frantic note.
"Call me. Please. " Followed by a lot of inaudible noise. "We might have to postpone this garden." He leaves a second and a third message, before I get the first one.
He's referring to the oil spill that's spreading like a curse across the Gulf of Mexico. Tonight's news doesn't say where the oil is any more. They're talking about whose to blame. When I look at the diagrams of the area, it seems to be heading in the direction of St. Bernard Parish. But they only mention the Chandleur Islands. St. Bernard lies behind them. And unlike those barrier Islands, St. Bernard is inhabited, and fishing is a way of life, not just for the fishermen and their families, but for everyone. One afternoon I remember seeing a boy commandeer a pirogue -- a little wooden motor boat. This one was painted, in intricate henna like designs - out on the 40 aubit canal. I assume he was headed down into the bayous. It was in the afternoon, and I thought -- wow! This is what kids do after school? He looked so calm, centered, strong -- likeHuck Finn. It's a strong belief of mine that all boys at the age of 13 should be sent down the Mississippi in a raft. Keep 'em out of trouble. The scene I remember of this teenage boy looking so utterly serene proves me right I think.
St. Bernard -- where I filmed for four months and where I dove, willy nilly, without much careful thought into the creation of a community garden on empty land. There's so much empty land now -- where houses used to stand. We thought...this is a good idea! We've battled the exhaustion, illnesses, entropy of this parish. It's hard for people to sign on to this project, Lettie Lee keeps telling me. People don't have the energy. They don't have the time But we want them to, all of us -- Mama Sue, World (World is August's nickname, gotten from his DJ days cause he was World-wise) Lettie Lee, David, and me -- even though we really don't know how we're going to accomplish it.
So I called August back and he didn't pick up. I called again, and again, no answer.
I wondered -- is it because I didn't call back soon enough? Is he so bummed out by what's threatening to happen to his Parish (even though he badmouths St. Bernard for being behind the times, a bastion of racism and so on, it's a haven for the likes of World, who spends long stretches of time on the banks of a bayou, pulling one catfish out after another) that he can't even talk about how he feels? He's pissed, I imagine. Or he's just completely depressed. One of these days he'll pick up the phone and I"ll find out.
To have your home and land die twice. That's a good excuse for anything.
Posted by sooznham at 8:22 PM No comments: Links to this post