This week, it's Mary, my dear and truly wondrous friend, Mary. It's hard not to mention that she had her 80th birthday a couple of years ago. That's NOT what makes her wondrous. But maybe you can't escape that insignificant fact, in light of the fact that every week Mary takes herself off to the Bryant Park Grill -- after reading great literature into a tape recorder for the blind, -- for a splendiferous lunch. Following which she takes a whirl on the the old restored Bryant Park Carousel. Every week! Mary has made numerous little "performance" videos -- one about her experimentation with hats (she wore a coquettish black hat with a veil to her gynecologist some years back just to see what he would say. As you'd expect, he didn't say a thing.) And does millions of tap dancing performances which she posts on Youtube (type in Mary McHugh). Mary has great legs. Mary is also a writer, and whenever we get together she's effusing about her latest idea or telling me about the upcoming publication of one of her books of Mary (hilarious) advice. They're small books that could literally fit in your pocket with titles like Eat This! 365 Reasons to Stop Dieting or, my favorite, How Not to be a Little Old Lady.
I joined Mary for lunch last week (she had come from reading Camus -- in French -- into the tape recorder) and after the usual light chatting that you do when you meet up with a friend you haven't seen in many months, we got down to a hard kernel of common personal truth, that at the moment took my breath away.
Mary and I (and millions of others) share being "Special Siblings," which is also the title of one of Mary's books. Special siblings refers to having a sibling with an 'intellectual disability,' what used to be called a developmental disability, and before that, terms which are no longer considered politically correct. (no comment) Mary's light blue eyes fixed on me and she said, in a voice that is so light, almost frothy -- 'the really bad thing was that we had to be good. I was so good!' 'Yes!' I said, meaning it from the bottom of my heart. Amazingly, that was the worst part of it all. It's still a problem, of course. Mary and I also shared the common fate of having had our siblings institutionalized. Perhaps that's why being "good" in ways that are so hard to describe and name, even to ourselves, may have stood out for us as the central problem, while kids today who have "special sibs" deal with much more concrete difficulties, or, anyway, different problems.
(If my parents could read this, they'd laugh hysterically. I think they thought I was plenty bad. And I probably was) But Mary and I knew what we meant. It was a moment of perfect understanding about a core part of ourselves. I didn't hear a thing other than Mary, or see anything other than her face. It was that kind of moment. So time stood still for a split second and then we went on with lunch. Mary chatted with all the servers, and everyone else who worked at the restaurant. She knew them all by name, and knew what book, or album, or trip they were working on. And then we shared a dessert and polished it all off with a ride on the carousel.
until next time,
Susan
filmmaker/sibling
Without Apology, a film I made about my brother
One~eyedCat productions
Posted by sooznham at 8:28 PM 1 comment: Links to this post 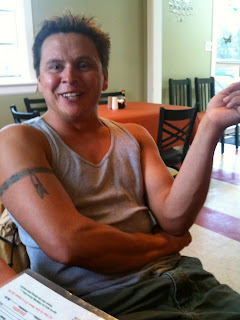 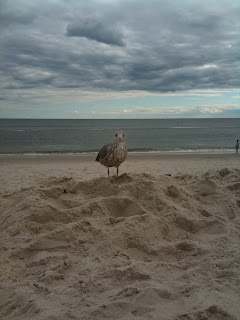 I spoke to this seagull yesterday. Not at great length, but in a friendly way, and in a low voice so as not to frighten him. (I've decided, for no ornithological reason, that it was a he) I've found this with birds, and with small reptiles. They're interested in me. They cock their heads and we make eye contact, and they're able to hold it for an unnerving amount of time. Mr. Seagull in fact held my gaze for about five minutes, while I prattled on about something or other (I tried to be reassuring - and also honest about my ability to feed it anything.)
Yesterday was the day I decided to visit my mother, who died New Year's eve 1992, as a result of a cardiac surgeon's slip. This doctor admitted it to my father and me a few days after my mother's surgery (yes, incredible) But I don't want to dwell on that awful revelation, and confession, both of which should never have happened, but on how I find my mother at the beach on Rosh HaShanah. I skipped services at this nurturing, permissive, disciplined, sometimes unconventional, free-thinking and often irreverant house of worship I've joined, Kolot Chayeinu, a tiny bit guilt-ridden. I told a fellow member who asked whether I was coming to the second day of RH services nothing about my plans.
I decided yesterday, after a many year break, to partake in the family ritual that my mother had established for us. A bit of background on my mother, Mitzi, as everyone called her, or Amitia, her given name or Shulamit Bathsheba Berger, her Hebrew name, whose initials (SBB) are etched on a gold ring I've worn for more than thirty years: A non-God fearing, but Jewish-identified, somewhat self-hating Jew, with good reason perhaps in her case due to her father, a domineering rabbi she seemed to loathe. She told me more than once, her voice shaking, about the rituals that were observed to the 'T' in their home, such as plunging all the silverware in the flower pots in the week before Passover while her father, who gave her not a second's worth of religious education, and who could hurl a plate of prunes across the dining room, indulged in lobster sandwiches on his paid holiday from his congregation down in Long Beach, Long Island, hundreds of unseen miles from his home in Montreal. My mother cooked a ham for her first Passover meal. (I often wondered what my father, who was far more conventional, must have thought when the glazed ham -- and I'm sure it was perfectly cooked and irresistible -- reached the table. Actually he probably wasn't as chagrined as you might think. Probably did NOT think he'd made a big mistake in marrying my mother. He told me about how, when a teenager, he'd "tested" God by playing ball one Saturday in lieu of attending synagogue and when nothing at all happened to him, it made him think. But I know he scratched his head in misery when he came home one day and found my mother painting the piano blue. )
So, with nothing but venom in her heart for all things to do with religious observance, every year my mother, father and I drove out to Jones Beach for Rosh HaShanah, walked the boardwalk, or sometimes right along the shore and we all agreed that God dwelt here. It was usually a bit cool, and we'd buy clam chowder and find a picnic table in the sun.
There's no doubt about it, he - God -- does dwell at Jones Beach. It is a perfect choice of a place for a non-observant Jew. Yesterday, which was the first day of the year I'd made it to the beach at all, I found the scene nothing short of mesmerising. Because the cool, constantly changing colors, the endless stretch of sand, the horizon that confounds water and sky screams -- the infinite, the source of everything, the beginning of time.
I tried to think weighty thoughts like these. But I became quickly aware of thinking, which I didn't want to be doing. I wanted to be feeling, and remembering. And luckily, these thoughts didn't stick. They slid away when I began to talk to the birds I came across as I walked in my bare feet "down the beach." Which is something my mother would have done. She spoke endearingly to to all kinds of creatures, as though she were their mother. 'You poor thing!' she might have said to the miniscule sandpiper that was hopping along on one leg. I did it too, not out of a sense of modelling my mom's ways -- I think that would have been somehow a bit sappy -- but out of a sense that it was what the occasion called for. I spoke to this little bird. And I was, I'm pretty sure, terrifying the one-legged sandpiper and myself, I felt suddenly overwhelmed. I felt connected to my mother like no other thought or photograph or scrap of her writing might have done. 'How come you have only one leg? What happened to you? But look how well you're doing!' This small amazing bird, which was part of a swarm of sandpipers that flowed in and out with the waves, to snack on the grubby life that was left exposed by their retreat, kept up with her swarm remarkably well. Then suddenly, she let the other leg drop. She actually had two legs!
When I finally sat down on a towel I'd brought, and watched the sky turn dark and the sea turn to slate, and caught the alien eye of the seagull and began to ask the bird what it wanted, and to assure it I had nothing for it...I felt content. Content and completely at peace.
Posted by sooznham at 1:01 PM 1 comment: Links to this post