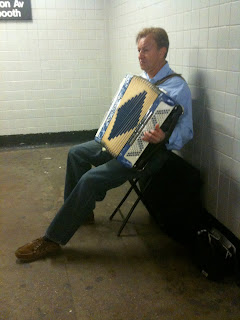 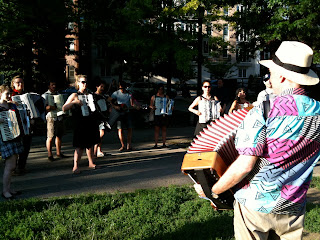 I took this photo -- the one on the right-- a couple weeks ago. Yes, it is a small orchestra made up entirely of accordianists. Would you have been able to resist running down to hear this extremely ad hoc group, who had been collected together by the man in the foreground, to create, as he put it, "a forest of accordians?"
When I heard they were going to perform, for one time only as part of a day called Make Music New York (held every summer solstice, or June 21st) from Staten Island to the Bronx, and all places inbetween, I called my good friend and neighbor, sure she would be as excited as I. Would you like to go with me to see, and hear a forest of accordians? Brett said that as far as she was concerned, one accordian is grating. I don't think there could have been anything less appealing to Brett than the thought of forty of them echoing and reverberating as an ensemble. But the accordian. No seat at the orchestra for the accordian. It's the orphan of instruments. I associate it with Paris or Berlin "between the wars." In the movies of the era, there's an old man in a beret, shambling down a cobble stoned street, playing for pennies. It's the instrument of the European blues, the accordian accompanies the down and out, Edith Piaf... It's regret and Regrette. (Who doesn't love The Accordianiste? I wonder if Brett doesn't) I know that the accordian has found its "serious" modern and American interpreters. Have had the wonderful pleasure to hear Pauline Oliveros, an accordianiste who has successfully escaped the French and the shmaltz.
But, still. How disappointing when the "forest" didn't succumb just this last time to the je ne regrette themes I so much wanted to hear! Instead, the conductor, a conceptualist of some kind, had one of those schemes, in this case impossible to decipher. All these accordianistes, as far as I could tell, were to waft between a few notes, coming in one at a time, at random, and then mush around until everyone had joined in. It wasn't a forest so much as a fog. After five minutes, I fled, and hung out by this "cool" jazz combo across the street in front of The Gate, a local bar which is always packed and tantalizingly rowdy.
The picture on the left is of an unknown accordianiste, spotted in an alcove of the stairway of the downtown A train. He probably couldn't get a permit to play on the platform -- yes, you need to audition to play on the subway platforms! And if you don't get the permit, you play, for pennies, in small out of the way hideouts, hopefully outside the notice of the transit police or whoever enforces these wild laws. So there he was -- yards away from the platform, in a spot where people rush by, not where they hang out waiting for the train. And he played the heart-breaking, Piaf-era tunes. Though it was unexpected, and I was rushing...there he was, the man in the beret so to speak.
If I don't have anything more to write this week about what's happening down in St. Bernard Parish with "World" or Mama Sue or Lettie Lee, it's because ... I wonder if the terrible things that are happening in the Gulf and to the Gulf are unravelling our -- imaginations, our faith in the project. In other words, we're drifting. I'm being a tad melodramatic. What's really happening is we're on a wild goose chase of a search for a tractor and of all yuck, coincidences, an oil company has snagged the one and only rental tractor in the entire Parish -- to cut the grass around its refinery.
I've been listening to "misery's the river of the world," by Tom Waits with the pleasure you get listening to incredibly sad music. Imagine these lines sung in the deep, impossibly gravelly growl of Mr. Waits:
for want of a a bird, the sky was lost, for want of a nail, the shoe was lost, for want of a toy, the child was lost, for want of a knife, a life was lost...
For want of a plow, the land was lost. So we can't find a plow, or we have to wait, the rental place said, until the oil company is finished with it, which may be a month from now, or longer. He implied the length of the wait is really completely uncertain. Kind of like the oil spill itself. Why should a month's or so delay bum me out like this?
It feels like "the last straw," I worry that the garden may be doomed, but Al assures me that it most definitely isn't. But bummed I am. Anyway, this post is dedicated to the tragic musicians of the world -- those seers.
Posted by sooznham at 7:27 PM